This week we are going to be talking about how to create some really enticing episode titles that will draw your listeners in. These strategies will really create intrigue in your audience, grab their attention and get them interested in listening to what you have to say.

In This Episode, You’ll Discover:

[Tweet ” You want to be very consistent with how you title your episodes.Â >http://bit.ly/1dpqePB”]

[Tweet ” A great title shows the value that your listener will get from your show. Â http://bit.ly/1dpqePB”]

Hi, I’m Ben Krueger, and this is Authority Engine TV, where I’m dedicated to helping you grow your small business with the power of podcast marketing every Thursday morning. Today we’re going to be talking about how you can name your podcast episodes so that they’re really enticing, and that they really get across to the listener the value that they will get from that episode.

The next thing is, let’s talk about two different formats that work really well. Number one is called the “How-to.” So if you’re titling any episode or blog post or anything like that, you’ve definitely seen the “how-to,” and it works really well, and I’ll give you an example of that in a second. The second one is the numbered list. You know, “Six Steps to (This),” or “The Four Main Cornerstones to How to blah blah blah.”

So the “How To” is one method, and then the numbered list is another, which can be six steps, or seven tools, or whatever you’re talking about in that episode, just include that number in the title, is really effective.

So the next thing you want to do is create intrigue, and this isn’t something that you always have to do, but it can be really helpful with your podcast title to create intrigue that draws people into your episode, and to check it out more. The other thing you can do is to try to distill the number one value people will get from listening to that episode. So what’s the number one takeaway?

So here’s a couple of those examples I was talking about with the how to. “How to Streamline Your Podcast Production Process with Jake Hower.” That’s a previous episode that we had. Another similar one is “The Four Main Methods To Monetizing A Podcast,” and that was a solo episode, so there was no guest.

On the value side of things, we could have “Getting Multiple Experts On One Podcast Call with Ray Ortega.” Or “Powerful Podcast Launch Strategies with Andy Drish.” So you’ll see that I use the “Six Steps To” or “How To” with the guest name, and whichever one you choose, just make sure that you’re consistent with it.

So that’s how you can title your episodes to make them really enticing and really interesting to listeners so they know what they’re going to get, but they’re still curious to find out what it is, and what the actual value is in that episode. So go ahead and implement that for your show, and go to the show notes for this AETV episode, and you can check out the links to other episode titles.

Use the giant orange button at the bottom left of the page to ask a question, and I’ll answer it on a future episode.

Leave a comment below with your thoughts, and share it with someone you think it will help! 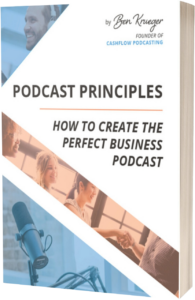